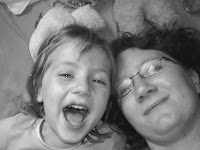 My daughter Mary is obsessed with money and make-up.

But the scary thing is she is only 4!

She wants money so she can buy magazines. You know the ones which come with a free toy. She likes it especially if it has a lip gloss or similar with it. Aaagh!! I am now restricting her use of make-up. It is stupid, she is 4. This shouldn't be happening now!

I know it is all just part of dressing up to her, like putting on her Cinderella dress. I really don't want to make a big thing of it but it is a bit embarrassing when she asks her 3 year old nursery school friend if she has any make-up (in front of the other mothers).

Maybe I should just let her play with it. After all it is only very light pink colours.

The other morning I woke up and Mary came to see me. 'Your hair looks nice' I said. And it did. Mary has that sort of hair that just looks great even if it isn't brushed. She has that sort of hippy chic look then. Well, this time it turns out she has been doing a bit of trimming during the night. She had cut the sides.

Her grandmother remarked on her hair today. She didn't realise Mary had done it herself.

I think I might have a hairdresser in the family which is good.

The picture is my photo for the flickr group Self Portrait Thursday.

no theres nothing about a html on the settings :s v frustrating! thabks for the help tho
ps mary is very cute, just keep her away from razors!

I love your photo! I have a 5 year old girl who is makeup obsessed and her 2 year old brother likes it too :D