I am taking part in the Crafteroo Pinterest Project Challenge.  The aim is to try and make (at least) one project from our Pinterest Board each month.  Actually I put the 'at least' there - I will be lucky if I manage to make one a month - you know me!

Here is my Crafteroo Pinterest challenge Board.  Anything I make I am moving to the new board which is the Finished Project Board.

And my first project uses more than one project - hurrah!!  It is a rag rug made out of t-shirt yarn. 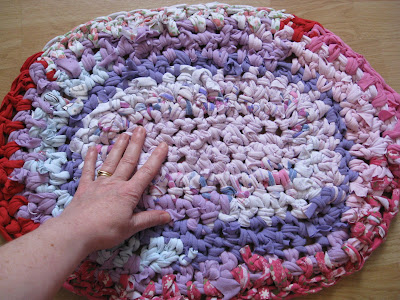 I used my daughter's old pyjamas.  Don't worry she has plenty more. I used this tutorial to make the t-shirt yarn but as I didn't have anything without seams, I had to adapt it which is why my rag rug has more knots and bit of fabric sticking up. I also had this tutorial on my board which is more or less the same. 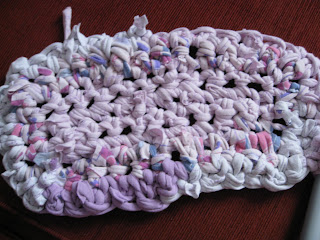 When making my rug I used my Christmas pressie 20mm crochet hook.  I made the pattern up really - just started crocheting a few rows to make a rectangle and then the next row, and then on, crocheted all around until I ended up with rather a nice shape, and until I ran out of yarn and patience.  But here is a nice tutorial from my Pinterest board to show you rugs.

Amazingly enough I did it all in one day. Yes indeedy. Which is why I have rather sore arms now and a callous on my finger.

My daughter liked it and is is destined for her room but first she wants me to embroider her name in the middle.  I think this sort of thing is rather a nice project to use old children's clothes because as I used the different ones I remembered the age when she wore them, and often who gave them to her.  A nice memory.  A a fun project.
Posted by Bigbluebed at 10:48

That's so many good things rolled- or rather, crocheted- into one, brilliant :)