Mary wasn't being brave in that sense as she wasn't scared. Who would be on that lovely little pony?  I think she wishes it was Angus, the great big horse from 'Brave' the new Disney film. 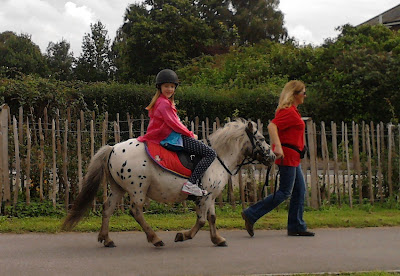 Mary saw it just before our holiday to Disneyland Paris. She loved it and so did I. I might have cried a bit at the end.

She came back with a few Brave toys.  But the dress was too much money at about £40. So silly mummy said 'I can make you one'!  Why do we open our mouths?!

Anyway I am going to make her one.  And hopefully it will be more like the 'Brave' one than Disney shops own shoddy production.  But maybe I shouldn't speak too soon!


On a humorous note: so the new Disney film 'Brave' has a gorgeous horse called Angus in it.  Well to celebrate their 20th year, Disneyland Paris's celebratory meal, advertised everywhere, was 'Angus Burger, Chips and cola'.  Hmm, not good thinking there.

Angus burger? oops! that is a very pretty pony Mary is riding.

It is a pretty pony and very small. The age range was up too 11, and as Mary is big for her age (at not yet 9) I was worried they wouldn't let her ride. But they did and she looks so happy.

LOL at the "Angus Burger" -oops! I loved the film Brave and my daughter and I both wished for red, super-curly hair!!! It was my dream as a little girl to soar through the countryside on a massive horse. Mary looks very at home on the pony :)