For the past couple of weeks we have had a spider in our garden.  Obviously there must be lots and lots but this one has made itself a bit more prominent.  It has weaved its web between two trees/bushes above our back gate.  It is a shared garden so there are about 4 flats worth of people who potentially might go through.

But spider is still there. She is high enough for us to pass under and if her web gets a bit too low then we just break that bit.  But we have left her in peace.

I have tried, unsuccessfully, to get a photo of her to show you but it has been too windy, or too bright and mostly I am not good at photography.  But here is one I took the other day followed by one I took this morning. 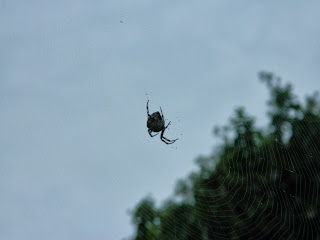 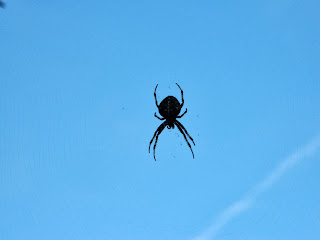 As I opened the front door I spotted this foolish snail who was just in the right position to be trodden on.  I took a photo before I moved him. 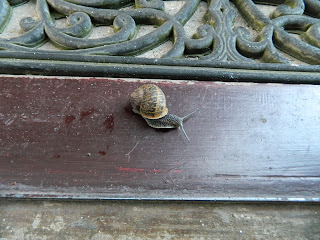 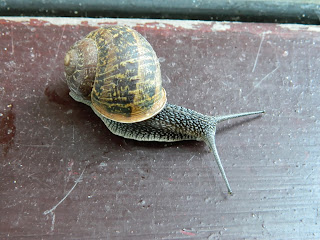 Lastly I took this photo of a dandelion clock.  It is not a good macro shot as the focus is a bit off but I think it captures the seed head nicely. 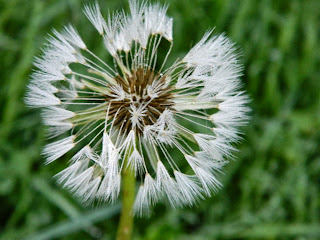 I say early morning but it was after eight o'clock and just before I took the girl to school.  I suppose I have to get up a bit earlier to get nice sparkly dew shots.
Posted by Bigbluebed at 09:04

We have lots of spiders too, one in particular that I always forget about because he is foolishly right in the middle of the gateway - so he rebuilds daily! They are amazing creatures.

I agree Heather, they are amazing. I have loved seeing our one. As long as I do not walk into her web, that is.